This needs to be seacrest out…

One is dunzo, one is back ON. You be the judge…

KStew & RPatz are mercifully calling it quits yet AGAIN — as sources I have out in the field as my trusty summa interns (apply within to be apart of this lovely & gentle #GASPNation) that confirm these allegations. They aint in a relaysh nomo, ‘ats a shame. Good riddance. Go away for the love of MOSES. You both seemed right for one another — what with the beautiful albino skin, terrible conversational skills whilst in public forums, frowns that would make even Chris Traeger shed tears of depression, and general disdain they both had for sunlight & other human interaction on a day 2 day basis. Wooooooooof, get ova yaselves, it’s finally that time to go the separate ways now that Twilight has finally closed up shop. You 2 may now follow that trend. A case like this has been solved, book ‘em Burt Macklin.

As for the other daring duo of a couple, they are now shifting gears back towards walking the , plank: Miley Cyrus (ITS MILEYYYYYYYYYYYYYY) & Liam Hemsworth.

This is GASP worthy if you ever thought of one. This ish just got realllll. As in real stupid.

Why the bologna are these peeps thinking this could have any sort of “smart” logic in aiming to getting hitched? Why oh whyyyy. This is the type of news that will keep us up periodically throughout the night, imploring our brains to tell us the answer to this sick riddle of life. In the meantime, all we here at GossipAndSports can do is take our most educated guess as to this malarkey. Pure silliness.

Y’all have serious trust issues. Miley and Liam ADMITTED this, that they enjoy/get the most out of their relationship when they can push each others buttons…oh, right, because that’s the ticket to a happy/healthy future. Umm hmmm. I must have missed that in the dating handbook I suppose, ouchtown: population ME sheesh.

On top of the lack of trust they also constantly fight and apparently no one is telling Ms. Miley that she’s WICKED young and should be out there being a wing-woman to either the likes to TayTay or Selena. Be a normal nickelodeon star: go cray, say you’re “finding yourself”, take selfies on Insta, gossip all the time about potench boys, and read this site every day like what EVERYONE ELSE DOES!

How to pass the ballie in the right sitch

Cheers to the NBA Final 4 being here and boy is it coming in awfully HOT HOT HOT with these spicy match ups thus far.

Spurs up 2-0 on those Grizz

Last night was a true thrilling game between the Heat boys and the hard fightin’ ‘Cers of Pawnee Indiana. Literally came down to a buzzer beater by, GUESS WHO, LeBreezy. His layup with no time left on the clock sunk the Pacers from trying to steal a game which seemed unfathomable from the tip-off. Credit goes to the short-handed Pacers who are not only without their best player in Danny Granger, but for going into Miami without backing down/coming fully to play. Went toe 2 toe with the big 3 from El Heat too, alas just a tad short in this one. We may have to ponder, think, rationalize if this is the closest they shall get? Will the continue to battle those cats on the boards to stave off being swept? All great questions, to which the answers are:

As for that SAS/Memph battle, it is rather surprising that the Spurs have that 2-0 lead thus far. Sure they were home and the higher seed, but still, wow. They stillllllllllllllll got it kiddies. Never doubt that nucleus there in big TX. Those playas don’t mess around when the calendars turn to May & June. BUT…I still think that Memphis takes both of their home contests to nod this baby back up at deuces all around/best of 3 series where anything is posssiblllleeeeee:

Keep ya peepers on the Zbo/Marc combo down low to eventually wear down the aging Spurs when they ship over to snappy Tennessee for the ongoing series. Has Tony Parker been special or what though, santa mariaaaaaaaa, he’s been a true floor general, spinning & winning. 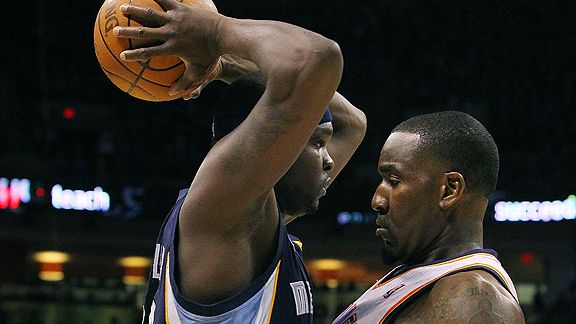 I’m not your bro, BRO

In the west, it is an exciting match up of 2 studly and efficient teams squaring off against one another:

Game 1? Sunday at 3:30p check yo local listings for the best channel to use HD in this bad boy. It’s going to be a barn-burnin series I can tell you that.

Predic? Grizzlies in 7. Yup, I have always had a knack for the dramatics which I am more than aware of, however this is what my gut tells me. I kept going back and forth as to which team is more superior — and I still believe that the Spurs 9 outta 10 times are going to be THAT team who comes out on top. Not this time, they will get 3 Ws but not the elusive 4th which would catapult them in the Finals to play the Heat (not a spoiler alert, I loathe MeeAhhMee but lezzbserissss, they aint losing to whomever comes out the East.)

The Grizz have been playing inspired basketball on both ends of the floor. They have guys who do the little things that truly add up at the end of the ballgame where you dissect how the heck they actually got that dub. Def Playa o’ the Year in Marcy Marc Gasol has been the bees knees, no other way around that. You need a 7 foot Center who game-in & game-out puts up lines of: 38mins, 20pts, 10 rebs, 3 blocks, 2 steals, 90% FT and is a manimal in the paint like flocca flame? Well then, this is your man & he is ballin so hard. His PIC (partna in crime) is none other than that wily bloke pictured above in ZBO aka Zach Randolph. They form a dynamic duo as the PF & C that steer the Griz O from all parts of the floor. Can kick it out to MC for 3 up top or Tayshawn on the wing or can have Tony Allen clog up any lane on D to impose his swagggg.

As much as I have meatlove for Coach Pop (and there is plentyyyy to go around) for being the best coach of the decade, going to US Air Force, and YoY getting the max out of each and every player who wears that ugly Spurs jersey, I think they just fall short in comparison to what Memph brings to the table. Love ya Manu, Bonner, Danny G (LI pride), Timmy Bankshot, Tiago Cruz Splitter, and Nando de Colo (such a sweet name), but I believe the Grizz are destined in 2013.

As for the East? Much more boring unfortunately. Knicks and Pacers will battle to see who can eventually get rolled upon by Los Heat. Woof I cannot stand that team, but again, they are not losing. They will beat Knicks/Pacers in 5 games. It won’t reach 6 games altho I’m totes praying for the ole upset-a-roo. But at the end of a day, dats just wishful thinking. Heat in 5.

Hey @MemphisGrizzlies, do us all a favor and FLATTEN that herb LeBron.

You got a problem? Jack will SOLVE/END YOU.

All fellow ’24′ and Jack Bauer and fans who enjoy to have their hearts beating out they chest on a week 2 week basis, there is some GASP-worthy news vis a vis this show again.

Fox executives said Monday that its drama “24″ is returning next May for a limited run that will stretch into the summer. The adventure series with Kiefer Sutherland starring as Jack Bauer ended its original run in 2010.

Awwww yeaaaaa SON. Time to fire up some old clips on YouTube, re-watch the series that are streaming on Netflix, or better yet, go out and celebrate like we all know how the REAL Jack aka Kieeefahhhh (in Babs from Teen Mom 2 voice) Sutherland does it up. Go big or go home, and my oh my does he like to go wickedddd hugeeeee. Get Jack Bauer some more Jack Daniels (double it pls)

The thought of this show even remotely coming back in movie form was considered a stretch and one could even give a retort such as “girllllllll pleazzzzzzzzz” and no one would bat an eyelash because of the veracity. But hey, it’s a comin and i’m a LIKIN.

When this baby is on FOX, don’t bother trying to contact me as I go “off the grid” to align with Bauer’s life…

Us here at #GASPNation would like to give all of our support, prayers, and good karma over to Ms. Jolie-Pitt for having the courage in going through something that many would be scared silly in even contemplating it…

AJP ended up having a double-masectomy after discovering she cares this certain gene which increases the risk of eventually developing breast & ovarian cancer. Ugh and woof to that grim news. Can you ‘magine hearing that?

She was quoted saying, “Once I knew that this was my reality, I decided to be proactive and to minimize the risk as much as I could.”

Just a terrible realization but she did the right thing in getting this outta her system as quickly as poss. It’s great to see how often than not, women are so strong.