Simba with the ASSIST

Bulls nation cannot be salty about their teams performance YTD (year 2 date.) They had battled injuries from pretty much everyone who laced up their kicks this season at some point — laughing at notion of panic/stress that was staring them squarely in they grills. Aint no thanggggggg.

But now that they have advanced to rd 2, it’s time to put on the big-boy pants. It’s Win Or Go Home time of the year. This message cannot be any louder than the guy who is pictured above, their franchise, their MVP DReezy aka Derrick Rose.

The balla hasn’t played at all this season. Not a lick, not 1 min, nada. On equal footing as Andrew Bynum for the year…you never want to be lumped in the same PAGE let alone same sentence as that skell. But dude, you have a bulls-eye on ya back meow. He’s been medically cleared for MONTHS to this point. Not 1 day, multiple months. You see him practicing fully with the team & not reporting any setbacks. He does pregame shooting and run-throughs. WHATCHA WAITING FOR??!!

Do More or else Chuck Barkley is gonna come for ya… 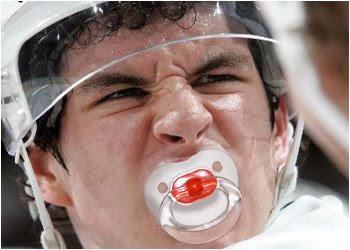 This guy makes my skin crawl, no other way around it.

Anyone shall admit how talented, gifted, truly special Sid The Kid is when he puts on his skates in the NHL. 0 doubt there, not looking to put any sorta doubt into that notion.

My so-called “beef” with him is the amount of scoring and whining/soft serve he puts in at nightly basis, especially vs. my beloved NY eye-lin-derz in the current 1st round playoff series #1 vs #8 seeds. Of course he finds the perf timing to come back from his injury just as the Pens get in the mix with the Isles to have an immed impact on O. Scoring, assists, you name it. The guy is everywhere you turn with that musty face-mask of a helmet. Last night he almost single-handily could have bested los islanders with his stick skillz. No bueno to watch that ish, thats foshow. On top of that, he flops & cries after seemingly everytime he is touched — as if he think he be God on that ice. Nah Kid Sid, nah bro.

Pls Do Less in the scoring & salty dep’t.

Get the kid a napkin woodja?!?!

The real H-bomb aka Matty Harvey is the TRUTH when he toes the rubber every 5th day for the Metropolitans of NY. The Mets have found themselves a true ace among the pile they stick in the back-end of their rotation. A stud who can put legit fear in guys who shudder in the batting box waiting for the next seed that comes flailing from the golden arm o’ Harv.

Earlier this week, Matty put up a pitching line of 9IP, 1 hit (infield BS single to short), 0 BBs, 12Ks…coming away with a NO DECISION. That is what you call amateur night, population mets batters 1-8. WTF is that noise?!

Your hoss of a pitcher goes the full 9 innings with that command and control and you cannot muster up 1 GD run for the guy? For Pete’s(or Matt’s mental stability) sake, that is just unfurrrrrr (T.O. voice.) He deserves better, you don’t want him to start resenting this team or city or lineup or coaching because he always gets hung out to dry when he’s on the bump.

Do…an adequate amount MH, you my friend are pure GOLD…